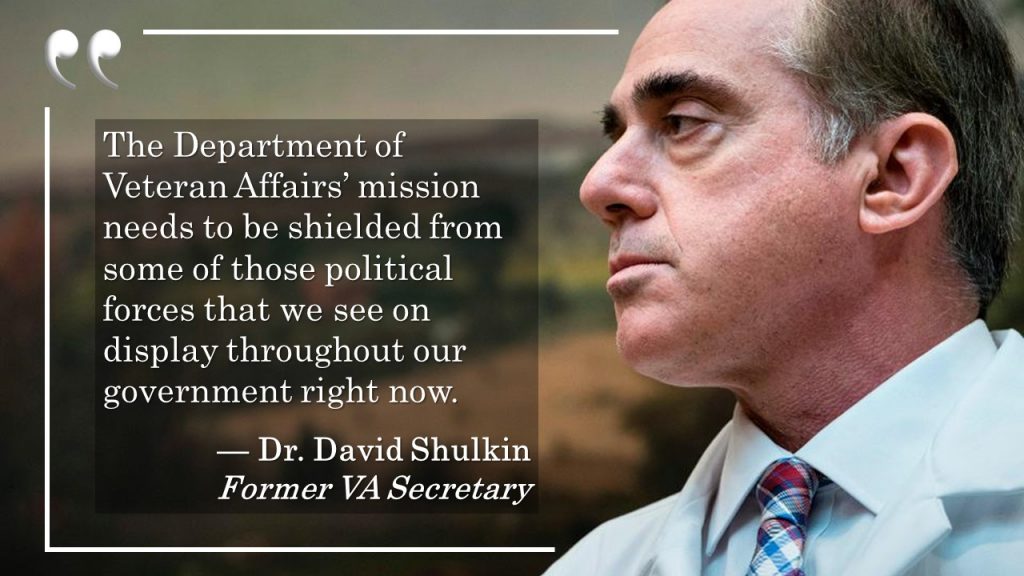 In the final episode of season three, we welcome Dr. David Shulkin, the ninth U.S. Secretary of Veterans Affairs.

For most of his career, David was a physician and then a private-sector leader who earned a reputation for turning around struggling hospitals. In 2015, President Obama asked him to help turn around the scandal-ridden Department of Veterans Affairs. Two years later, President Trump appointed him VA Secretary—making David the only Obama-administration holdover to serve in Trump’s cabinet. Lessons from his experiences in government fill the pages of his new book “It Shouldn’t Be This Hard to Serve Your Country: Our Broken Government and the Plight of Veterans” (Public Affairs).

In this interview, David talks about the difference between serving President Obama and President Trump, the “wait time” crisis that lured him to the VA and how the culture of government is a good match for improving patient care.

Here are some of the highlights from Episode 19:

On the differences serving Trump vs. Obama

I think most of the listeners understand that there’s a big difference in style between President Obama and President Trump. Interestingly, I experienced them in very different ways. Both cared very deeply about veterans and making sure that we are doing the right things, but they had different approaches. President Obama was very thoughtful, analytic and careful in policy making and decision making where President Trump was much more willing to move quickly and take risks.

On politicizing the healthcare of veterans

For me, the issue of veterans should be a bipartisan issue. It should be outside of the traditional political divisions that we see so much in this country. I was very proud that I worked both as Under Secretary and as Secretary in a bipartisan fashion. And in fact, most senators and congressmen that worked with me had no idea if was a Republican or Democrat and that was exactly the way I wanted it. When you’re dealing with improving the lives of veterans, that really should not be a Democratic or Republican issue.

On dealing with scandal in the VA

The reason why I came to government in the first place was because of the wait-time crisis that was receiving national attention, where veterans were being alleged to have been harmed, some of them dying because they weren’t able to get access to care. So, when I entered government, I had a mandate to fix that and I certainly was committed that-that was going to be my top priority to make sure that every veteran that needed healthcare was getting it in a timely fashion.

On mental healthcare and suicide prevention for veterans

The single top priority that I had as secretary that I established … for the Department of Veteran Affairs was to reduced veteran suicide. With 20 veterans a day taking their life, it was and still is an epidemic in the veteran population, as well as the greater American public health issue that we see today. I think that the Department of Veteran Affairs has really been a leader in trying to reintegrate physical care with behavioral health care.

On the over-reach of Trump’s political appointees

What we’re seeing is the power of political appointees throughout the administration to influence decisions that are really somewhat more political in nature rather than necessarily what is good public policy. And when it comes to the Department of Veteran Affairs, I experienced many of these political appointees trying to influence what I would call their ideology of how government should work rather than necessarily what was the right thing to do for the veterans that we served.

READ: Full transcript of our discussion with David Shulkin