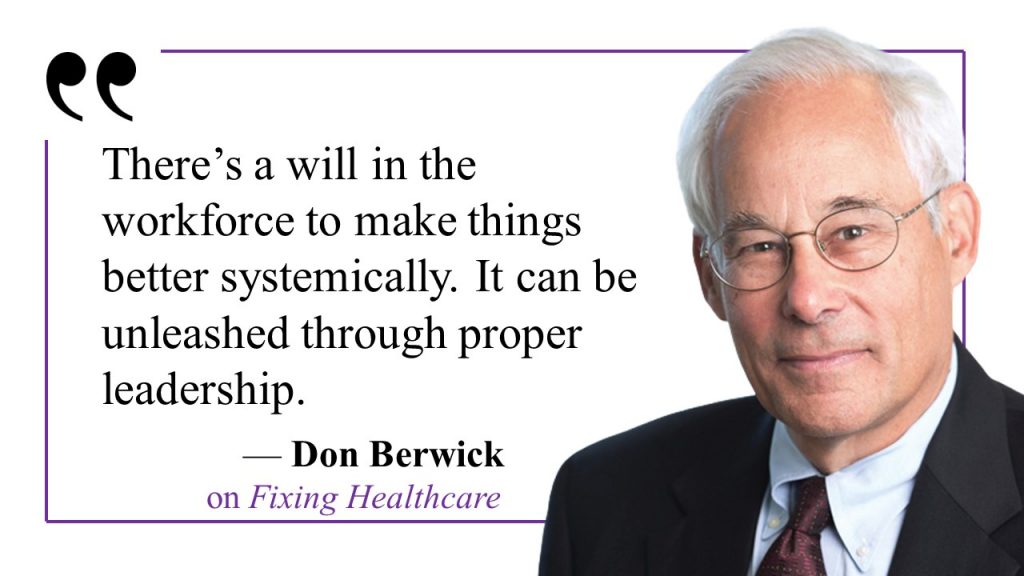 Returning to the podcast this week is a household name in medicine, Dr. Don Berwick, who made his first appearance on the show in season one. Back then, Don said something that would turn out to be highly relevant to this: the seventh season of Fixing Healthcare.

“We have made so many stupid rules [in healthcare],” Don said, “and those stupid rules have to be stopped. They have to be taken down. Many of them are rules that make no sense.”

Quick bio: Don is the former president and CEO of the Institute for Healthcare Improvement (IHI) and led the organization’s 100,000 Lives Campaign. He’s the former administrator of the Centers for Medicare & Medicaid Services (CMS) and has served on the faculty for Harvard Medical School and Harvard School of Public Health.

On fixing healthcare with help from colleagues

“I’ve never done anything alone. It’s with a group of people like you, Robbie, who understand that we’ve got to make changes, our oath needs to be honored, and that’s only going to be done if we change the way we deliver care. I think that the lesson I learned early on is that the receptivity in the workforce is enormous, once offered the opportunity to improve the work they do to get really involved in all the dimensions of excellence. The vast majority of people in healthcare, doctors, patients, nurses, pharmacists, they really want to make changes. And if you can drill down to that energy, you can have success.”

“One of the most dramatically positive experiences in my career, I think, was the 100,000 Lives campaign back in 2004. The architect was my colleague still, Joe McCannon. We developed the idea of trying to mobilize energy throughout the nation in hospitals to adopt a relatively simple set of changes that would save lives by improving processes by standardizing and spreading practices that worked. Well within, oh, barely six months, we had over 3,000 American hospitals enrolled in that project. I think there’s a will in the workforce to work on making things better systemically that can be unleashed through proper leadership.”

On changing the system of care

“The trick is to learn to think systemically, for clinicians to understand that they are citizens in complex environments, much bigger than themselves. And only when we get involved in, buoyantly, happily, joyfully get involved in celebrating and working in those interdependencies with the support of leaders can we make progress. It’s really frustrating to try to be a hero all the time. It doesn’t work.”

“Prevention is always hard. You don’t actually know what doesn’t happen, but once you bring a scientific lens to this problem of excellence and get honest about the data, you can see it, you can see the harm.”

On breaking hammerlock of healthcare financing

“We’re in a hammerlock right now. The incumbent financial system is so deeply invested in the technologies and processes of acute care, some of which are miraculous, lives are saved every day by organ transplants and heart surgery and advanced chemotherapy that we should never give up, never ever give up. But in order to support that technocracy, we’ve developed a financial architecture that is confiscatory. It takes everybody’s money and talk about breaking rules. The rules for payment, the rules for profit, for greed that allow greed to enter the system are costing us dearly. And I think the incumbent system doesn’t want to change it. It doesn’t want to see that money shift.”

On thinking globally to change healthcare

“We really need to become globalists in our thinking. It’s not un-American to ask how other nations and other communities deal with health and wellbeing and at what price, it’s instructive. And we need to have a humility to do that searching.”