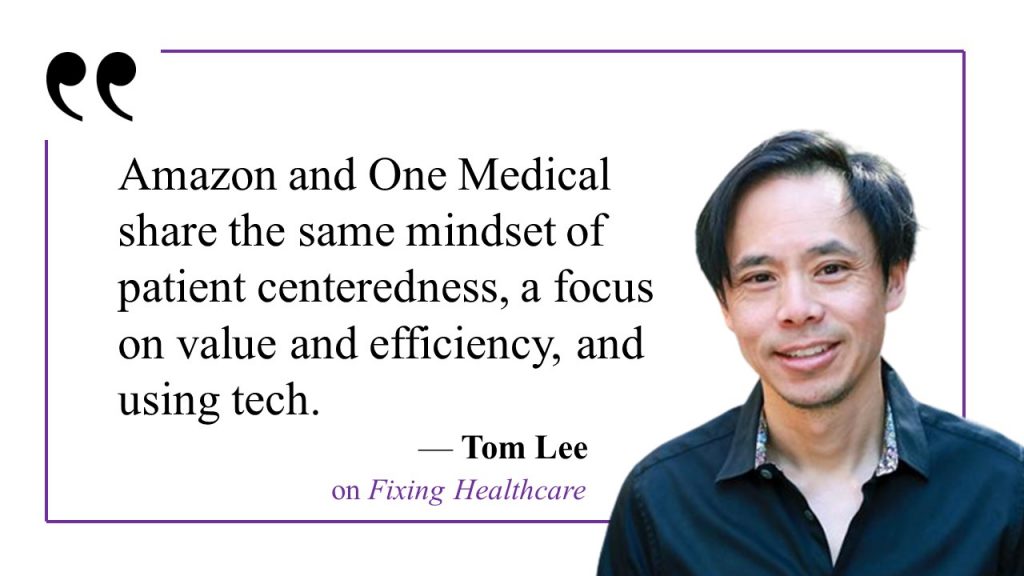 Dr. Tom Lee founded Epocrates, one of the earliest tech-enabled healthcare applications for doctors, and One Medical, the primary care-first organization recently acquired by Amazon for $3.9 billion. He is now the CEO of Galileo, a virtual care-first healthcare startup he hopes will make medical care affordable for all Americans.

Though Lee is no longer with One Medical, and he was not involved in the recent merger announcement, few people are better equipped to weigh in on Amazon’s emerging role in healthcare. Will Amazon disrupt healthcare’s traditional powers? Can the company reshape primary care and fix the broken parts? Where will American healthcare be in 10 years?

In this interview, hosts Jeremy Corr and Dr. Robert Pearl ask Lee to discuss some of medicine’s unwritten rules and norms. These are, as listeners know, the norms and behaviors that dictate the way doctors think and behave.

On being a healthcare ‘rule breaker’

“Everywhere I looked [in medicine], there were norms that nobody could explain to me. And even as a med student and resident, we did a lot of things that didn’t make a lot of sense. Our mission was to care for patients in a thoughtful manner, but what we were doing seemed antithetical to that. So even as a young physician in training, I just started noticing dissonance with what we were doing from what we thought about why we had joined the profession.”

On ‘specializing’ in business as a doctor

“What were these mysterious forces driving the systems of care that I felt as a clinician were inappropriate or certainly suboptimal? So that’s what ended up leading to my business career. And this was not something that was considered very vogue or sexy among doctors. In fact, it was viewed as a negative trait. And most of my other colleagues were going into specialist kind of training, but my specialist training ended up being business, and it allowed me to see the world more broadly than where traditional medicine typically is looked at.”

On memorization in medical training

“Relying on clinical memories or human memory to make any kind of judgment, I think, is unwise, particularly as we look at the future. So we need to reexamine what we reward, and (how we) train young physicians and clinicians in training in general. I personally never found memorization to be that inspiring or helpful in my medical training … And I do think that’s something to reconsider as we start to examine the workforce and frankly, the profession of medicine.”

On the inspiration behind One Medical

“As a young physician in training, I was like, ‘I don’t want to practice in any of these broken models.’ I had worked in almost every environment, whether it be academic institutions, private practice, capitated HMO models, native health service organizations, all really great organizations with well-intended providers and leaders, but the care model just didn’t make any sense. And so I knew that there was a better care model that could be designed, particularly given how much we were spending in healthcare overall. So for me, the inspiration was to kind of say, hey, primary care is a broken layer. Everybody recognized this 20 plus years ago that primary care was broken. Nobody wanted to invest in reexamining how to improve primary care. And so the real impetus behind One Medical was, can we validate that a higher touch, better primary care model can be built and scaled in an economically viable fashion?”

On spending time with patients

“I remember something that Don Berwick said way back when I was a resident, ‘The thing that patients want is time with the doctor.’ It’s not a unit, it’s the time with the physician. And so a lot of inspiration with One Medical was how do you actually enable that with a fixed reimbursement model for the most part? And the key innovation there was administrative redesign … The average practice in primary care is overwhelmed with administrative burden, but they don’t have the sophistication, particularly as the complexity has been layered in over decades to redesign that. And so I had the luxury of starting from scratch and redesigning it. And now that technology was more available, I wanted to design it using technology. So that allowed us to 10 x the service at about a third of the administrative overhead of a traditional practice. And then that allowed us to give more time back into the physician exam room, which allowed patients and providers to have more time. And we got all the other people out of the way.”

On his new virtual-care company Galileo

“At high level, we are reexamining the norms of how should care be delivered, and this had started pre-pandemic, but there are some strengths to an office visit, there’s strengths to a video visit, but there are a lot of weaknesses to that form factor. And we believe in a more data oriented, evidence oriented approach to how care is delivered. So from a quality perspective, how do you redesign quality into the care model. And then in parallel, designing affordability into the care model. And so being more capital efficient, more labor efficient, and covering a broader range of services and scope is really kind of the thesis of Galileo.”