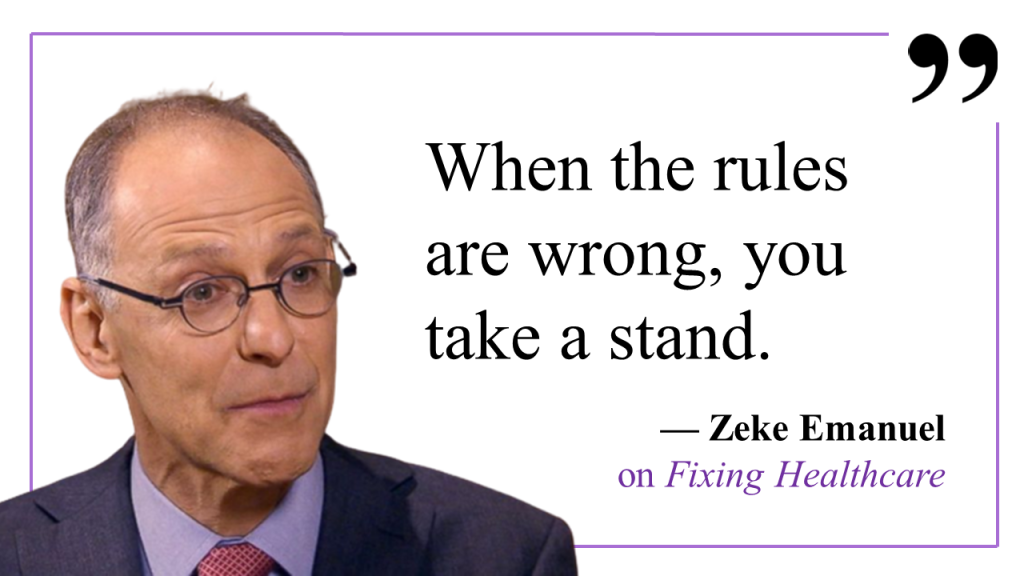 Dr. Ezekiel Emanuel has spent a lifetime challenging the establishment. He says that tendency is very much a part of his family’s heritage.

“My mother, not infrequently, would have to be in school because her sons were opposing rules and speaking out when everyone else was silent.”

Those other sons happen to be Rahm Emanuel, the former Chicago Mayor and current U.S. Ambassador to Japan, as well as Ari, an American businessman and CEO of the massive entertainment agency Endeavor.

Zeke, himself, is an oncologist, medical ethicist and a major contributor to the Affordable Care Act legislation. In this interview, hosts Jeremy Corr and Dr. Robert Pearl ask him about the rules of medicine that deserve to be broken and who among us can lead the charge for change.

On the Emanuel Family

“We are rulebreakers. My partner is always saying, ‘You think a rule is a good suggestion and not as a rule in the sense that most people think about it.’ I would say that it comes from our parents.. My mother, very early on, and I mean very early on, when she was a teenager, was very dedicated to Civil Rights well before white people and white women were heavily involved in Civil Rights … And then in 1965, right after the election, when Medicare was being debated and legislation was moving and the AMA opposed it, (my dad) quit the AMA.”

On his reluctant path to medicine

“I would report myself as a reluctant physician … I really was not very fond of medical school, mainly because I didn’t like the hierarchy of medicine that everyone deferred to whoever was the most senior person around as opposed to, let’s have a discussion about this. And I also did not like all the memorization of medicine and what really appeared to me during medical school to be a lot of irrelevancy that I couldn’t imagine would be really related to treating patients and making advances like relearning the Krebs cycle, like the Startling law and things like that.

On regrets with the AFFORDABLE CARE ACT

On dealing with death as doctors

“I do think that medicine has moved on since the time that you and I trained in the sense that when we were training almost every patient who died in the hospital got resuscitated. DNR orders were still controversial. Withdrawing treatment was still controversial. We didn’t talk to patients about it, and the majority of patients were dying in the hospital. Well, I spent a lot of time in the end-of-life care field, first of all trying to understand what really motivated patients and then trying to change our norms about it. And I think the norms have changed … I think that this notion of do everything no matter what has evolved, and I think that’s super important.”

“Human beings are on a spectrum or a bell-shaped curve or some kind of curve, where some people are cognitively intact, are physically intact well after 75. Most of us are not outliers like that. Most of us are solidly in the middle. And what you see is in the middle, the rate of Alzheimer’s goes up at 75 … People retire, they end up being less creative. They’re just not producing and contributing in the same way, and that’s not the way I see my life. I don’t want my children or other people to remember me in a particular way. I want to go out being very active, totally intellectually engaged, physically fit. And so that’s 75. And, again, it’s just playing the numbers.”